How to Manage a Nearly 100 Degree Ironman – SlayRx

Once again, Ironman Chattanooga was blazing hot and humid with real feel in the lower 100 degree vicinity. The longer the day wore on the more blistering it felt. On a challenging course, TriCoachGeorgia and Team Enve member Chris Keysor, also known as Gator to his friends, delivered a truly inspiring performance, using SlayRx.com Hydrate, Diesel Plus, and SparkPlug products. Gator can fill you in on his hydration and fuel plan if you message him. This race report follows. Take note that Gator finished 13th in his age group in the Ironman 70.3 World Championships there in 2018 and 15th in his age group at this race.

As always, the city of Chattanooga did not disappoint and hosted a fully supported and challenging Ironman event. Although the course might not be the most challenging with a down river swim, rolling bike and half the run along flat river roads, the heat proved to make the racers dig deep just to finish. Starting on the bike with the SlayRx Hydrate, cooling with water and steady pacing led to running most the run with ice stuffed down every portion of your kit and run walking just to be able to survive. This race ended without a personal record or even the placing I wanted but it will be long remembered as one of my proudest sporting achievements. When I tell people about this race, I start the story with I started a marathon at 2:00 in the afternoon on a sunny 93 degree day and I will never be the same.

I have had the pleasure of racing three times and training constantly in Chattanooga. The city continues to be one of my favorite racing venues with welcoming people, incredible volunteers, a vibrant downtown and a race director that runs a very professional event. I simply can’t say enough about this city. And as mentioned in the short version, this race will go down as one my proudest sporting accomplishments, almost matching the Ironman 70.3 World Championships from several years ago held at the same venue.

Leading up to the race, my training was pretty solid after a decent return to racing at IM 70.3 Ohio where I placed 8th place in my age group and earned a roll-down slot to the 2020 IM 70.3 Worlds in New Zealand. Working with Coach Harvey Gayer aka Coach Slayer, with whom I have a long history of collaborating with to help me add new elements to keep my training fresh, I had a perfect nine weeks in between racing allowing for a six-week build and a three-week taper.

The six-week build was tiring including many 100+ mile rides and long runs up to 20 miles. It was a hot summer in Atlanta and all the long rides and runs seemed to end at 2:00 in the afternoon. The heat led to chronic fatigue and was a real drain mentally and physically, not to mention I have work and family priorities as well. Additionally, I added in twice a week altitude training at Elemental Altitude – https://elementalaltitude.com – located in the All3Sports.com location, that included vo2 and threshold training.

Thankfully a huge plus was my switch of my hydration and fuel products to a new manufacturer, SlayRx.com. I used all three of their products Hydrate, Diesel (plus), and SparkPlug as I learned much from my testing at SlayRx headquarters in Atlanta this year regarding my sweat and sodium loss that I was later able to fine tune in training. Looking back, I concluded that this swap was a real positive change. At the end of the training block as the taper started, I was mentally and physically exhausted going into taper; yet, I felt good about my bike and run. Sadly, I was far short on the needed swim training.

About 10 days before the race, we were enjoying reasonable temperatures in the 80s and temperatures on race day were being forecasted to only be in the high 80s. About 7 days out, I casually checked the forecast and my jaw dropped. The expected temperature was up to 97 on race day! Given the hot summer and long training in the heat I might have been physically ready but I was not excited about the race.

A couple of pre-race points. Given the weather my traditional motto that I write on my arm went from “Eat, Breathe, Smile” to “Drink, Breathe, Smile.” All the preparation and planning went from worrying about nutrition to making sure I had what I needed for the heat including drink mix, ditching the aero bottle and even packing advil (not something I would normally consider). Also, I had a slight mechanical issue when I tried to tighten the bolts on my chain ring. Watch that torque, aluminum bolts don’t take the pressure. With a little thanks to a great local bike shop, Podium Multisports, I was on my way.

The lack of swim practice really showed leaving the water in 73rd place and 18 minutes behind the leader.. Uggh. That is horrible for a down river swim (not a lot of current but still). Nothing really learned from the swim but wondering whether it was faster to follow the buoys the long way or cut the line and swim less distance? Fortunately getting on the bike was the beginning of my race. I had the 10th fastest split in my age group putting me back to 16th by the end of the bike leg.

Overall I was happy with the bike and came in feeling pretty good. But as we all know, the run is where the race is won or lost. As I started running I still felt good, except, sadly, my core temperature seemed to shoot up and I was overheating on the first mile. Dumping a ton of ice into my front and back kit and visor started to reduce the heat. I lined sponges down my belly and back to hold the ice longer to melt, but still I was dropping ice like Atlanta snow coming out of every aid station. This is where I give a big hat off to the race director and the volunteers. Every aid station was well supplied and the volunteers quickly learned what the runners needed. My favorite volunteer trick ended up being them wringing the cold water out of the sponges over me.

By mile 4 of the run, I was feeling “good” again taking the pace down. That great feeling continued through the hilly back part of the course until mile 16. It was great to get shout outs from my friends and teammates on the course and apologies if I was too deep in the pain cave to smile or shout back at you.

Being that this is not my first rodeo, I know the wheels will fall off in any Ironman but in Chattanooga that day the wheels fell off so early I didn’t know if they would get put back on. If you ever wonder about the power of our community you will see it at the Ironman distance. Having pals like Slayer and TaxSlayer cuss and urge me on respectively, and others tell me I looked good when I knew I looked the hell, meant the world to me. Then, when I really needed a lift, at mile 17 when I was still sputtering and walking, a fellow competitor I had been running with earlier on ran by me and said “If you don’t start back now you will regret it. Come with me.” I ran the next two miles with this fellow without saying more than two sentences, but I will remember that 40 year old whipper snapper for the rest of my life.

Although by mile 20 the wheels were back on, the wheels weren’t very round. I was topping out at 9:30 minute/mile on the flats, which for me was slower than I needed for a top spot. I was doing all I could which included walking up hills and pounding my legs going down hills. But really, that was what the day held for me and plenty of others. In fact, despite how bad the run felt to me, I still picked up one place at the end so we all must’ve been struggling.

Coming through the finish line to be met with my medal and support crew was such a huge relief. I was so thankful to be done. I took some time to gather my stuff and my sanity and headed back to my hotel for a shower and to lay down.

Once again, I was an Ironman. The pride from this one overcame any disappointment of a higher placement. For me to be competing is a blessing that I deeply appreciate, and, for me to have survived racing in that heat was a testament to my inner strength and external supports. Thank you all for being a part of my journey and I look forward to seeing and cheering for you as well!

Previous Reading
5 Tips for Mastering Triathlon Transitions – SlayRx
Next Reading
Ask a Doctor: When Should I Replace My Running Shoes? – SlayRx 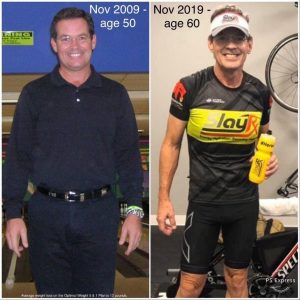 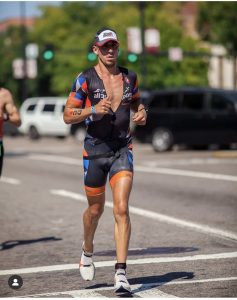 Competing in a Season with no Races by Coach Kara - SlayRx